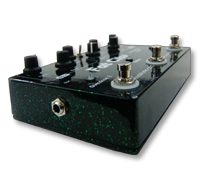 It consists of two completely separate and unique overdrive circuits, as well as a boost circuit, capable of increasing both the volume and the sustain.

Overdrive 1 is thick and complex, with a midrange control and plenty of gain on tap. Perfect for heavy lead and rhythm work, this overdrive begs you to get your rawk on.

Overdrive 2 is smooth and warm, with a presence control and remarkably realistic breakup. Rock, R&B, Country - you name it, this does it.

The clean boost is re-routable via a mini toggle switch located directly above the boost pot. This allows you to place the boost in front of, or after the overdrive circuits, and it's all True Bypass.

This may well be the last overdrive you ever buy. Welcome to Fat City.


Fat City features three true-bypass circuits, so your tone won't suffer went you want a little peace and quiet. Each pedal is carefully manufactured by hand, using only the finest components.